The Power of Beta Alanine 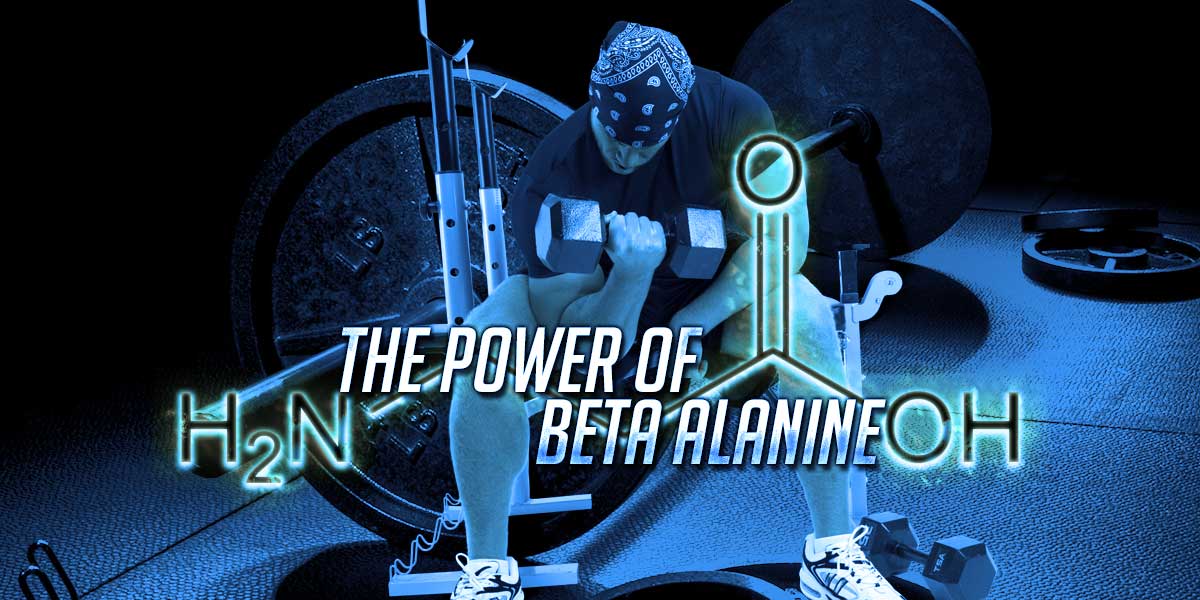 Beta-alanine is a precursor of the dipeptide carnosine. This tiny little protein prevents the acid level in working muscles from rising too fast. Carnosine works as a buffer, which enables muscles to keep working longer before they become fatigued. The effect of beta-alanine is similar to that of creatine, but it works in a different way. That’s why sports scientists suspect that a combination of creatine and beta-alanine could be a pretty effective mix.

Some of the key benefits shown in scientific studies include:

One of carnosine’s major roles is its positive effect on lowering acidity in the human body.

During an intense workout when a muscle contracts repeatedly, it becomes more and more acidic. This, in turn, impairs its ability to continue pushing to your maximum potential, until eventually it you can’t push any further. This is one of the ways muscles become fatigued.

Carnosine counteracts this by reducing muscle acidity, thereby increasing the amount of work the muscles perform before they fatigue. Beta alanine acts as a pre cursor and converts to carnosine, there for creating a buffer effect on acidity levels in the body.

Beta Alanine Enhances work capacity for over 55 year olds
The researchers showed that beta-alanine increases the working capacity of the muscles of people over the age of 55. And no, the study, which was published in the Journal of the International Society of Sports Nutrition, was not financed by a supplement manufacturer.

Beta-alanine effective for weeks after end of course

For up to two months after taking your last dose of beta-alanine you’ll still be feeling the effects of the amino acid, according to sports scientists at Ghent in Belgium. And the better you react to beta-alanine, the longer the supplement remains active.

The general consensus has been that supplementing with beta-alanine is only effective during intensive efforts that last from 60 to 240 seconds. However, a recent Human study published by Spanish researchers, affiliated with the Alfonso X El Sabio University, shows that strength athletes who perform circuit style workouts can benefit significantly from Beta Alanine supplementation.

How much Beta Alanine should I take?

To be 100% honest the amount you see in products will vary, and so will the recommendations based on what a particular company has in their product! In studies the consensus has been 2 – 5gms per day, however there is marginal difference in performance from taking 2gms vs 5gms!

We believe synergy is more important than throwing big numbers around. Hence we have opted for 2.5gms per serving in our Pre-Determined Pre Workout formula.
Synergy refers to the sums of the parts is greater than the whole. Research has shown that for pure performance and muscle pump Citrulline Malate is the King! This is why this is the mainstay of our Pre Workout Supplement and the additional ingredients are considered synergist’s.

We include Beta Alanine along with Tri Creatine Malate. These two ingredients have been shown in scientific studies to complement each other, they work synergistically!

We have also included Agmatine Sulfate to enhance nitric oxide levels. Plus 300mgs of pure caffeine anhydrous for peak energy, focus and performance. There have been hundreds of studies on caffeines performance enhancing benefits for athletes so it made sense to include a decent caffeine hit per serve.

More importantly its what we don’t include in our product that matters.
No cheap fillers, No artificial flavours, No artificial Colours.
We only use 100% Natural Fruit flavours and Stevia is our sweetener of choice.

TO NAIL YOUR
GOALS!

With Pre-Determined
PRE WORKOUT FORMULA
SAVE $20!